This massive study takes up one of the most durable hypotheses of early modern studies--that of a "general crisis" in the seventeenth century.

Since the s, historians have debated the causes of both a protracted socioeconomic downturn and, especially, simultaneous rebellions and revolutions that struck many states in the mid-seventeenth century. The theory is now so widely accepted that T.

Rabb has suggested it merits simply the label "crisis," like the Renaissance and the Enlightenment. To this historiographical tradition, Geoffrey Parker offers a new etiology, a detailed global synthesis, and a redefinition of the crisis itself. Parker's major thesis is that the crisis was in large part the result of an era of global cooling that some climatologists refer to as the Little Ice Age.

Parker avoids a simplistic view of the relationship between climate and society. Indeed, he asserts that the climax of the crisis in the s and s came prior to the climax of the Little Ice Age at the end of the seventeenth century.


He nevertheless argues that for much of the seventeenth century and the start of the eighteenth century, a "fatal synergy" developed in which an era of climate deterioration interacted with social strains and conflicts to produce a period of horrific wars and violent rebellions xxii. Parker clearly demonstrates how a cooler climate reduced food production in agrarian societies governed by "fiscal-military states" dependent largely on taxes extracted from a peasantry and organized for war.

The upshot was social conflict, war, and, above all, hunger. One may doubt the repeated claim that in the crisis a third of the world's population died, an assertion that Parker takes from a remark by the abbess of Port Royal in An unknown error has occurred. David Parrott is fellow and tutor in history at New College, Oxford. History , Cultural history , Natural history , , Natural disasters , War.

Contemporary accounts leave little ambiguity about the character of the 17th century. Natural disasters, warfare, political unrest and rebellion combined to bring about levels of mortality, destruction and collective trauma unmatched until the midth century.

The confessional conflicts, rebellions, plagues and famines of the 16th century were mild by comparison. Merriman called them in his comparative study of The view that these natural and human catastrophes reached a climax around the mid-century implied that there was some improvement after that. Europe did not descend into anarchy, so the crisis must have led to recovery.

But if so, what was the crisis about, and what was its resolution? The original case for a crisis was made in by Eric Hobsbawm, who argued that it should be understood in the context of the transition from feudalism to capitalism: vigorous mercantile and commercial interests that had been gaining strength through the previous century reacted with rebellion and revolt to the economic and political constraints imposed by feudal elites.

In the end, both interpretations were of course thoroughly Eurocentric. How useful was the concept of the transition from feudalism to capitalism when examining political upheavals in midth-century China?

Did it make any sense to discuss the crisis of the Ottoman Empire in terms of a struggle between a centralising monarchy and reactionary provincial nobility? The desire to re-examine the connections between a series of events that were geographically dispersed but chronologically contemporary led to another set of essays, The General Crisis of the 17th Century , published in and edited by Geoffrey Parker and Lesley Smith. The absence of recorded sunspots and the presence of substantial carbon deposits pointed to a lowering of average temperatures across the world in the midth century, and the resulting Little Ice Age was seen as the prime cause of endemic hunger, malnutrition, subsistence crises and the resurgence of virulent epidemics.

When these natural scourges were accompanied by intense warfare, heavy taxation and economic disruption, the pressures provoking resistance and revolt multiplied. The volume generated renewed discussion but there were few publications that directly developed or refined the notion of the 17th-century crisis. It is an irony that would not be lost on Geoffrey Parker that the Little Ice Age is today more likely to be appropriated by climate change sceptics than by historians: humanity survived global cooling, they argue, so we need not worry about global warming — just another part of the cycle.

His epilogue is a plea that the lessons of climate change in the 17th century should not be ignored or misinterpreted.

We should be in no doubt that decisions taken now will have an effect on the future impact of natural catastrophes, the resilience of agriculture and the competition for material resources. The book has been 15 years in the making, and its primary and secondary sources stretch across every continent and extend well beyond the 17th century. Parker explores the crisis on the basis of a massive accretion of new evidence, analysis and global case studies, particularly from outside Europe.

The opening sections set out an extended analysis of the factors — natural and human — that drastically worsened survival chances in the first half of the 17th century.

Seen from a global perspective, cooling has other dramatic consequences. Wars were fought across much of the globe and expanding military ambitions and ever larger armies coincided with a general lessening in state control over the army organisation. Combat deaths, though numerous, were less important than the impact of soldiers on civilian society: the movements or, worse, the billeting of troops brought poverty, starvation, brutalisation, disease and wanton destruction.

As Parker points out, the almost universal population increases of the 16th century had led to a volatile situation in which any reduction or disruption of food supplies, any decline in the availability of marginal employment, any fall in wage levels or increase in rents, pushed large groups into destitution and starvation. War, and the mismanaged demands of sustained military activity, brought precisely these problems to an already vulnerable population. 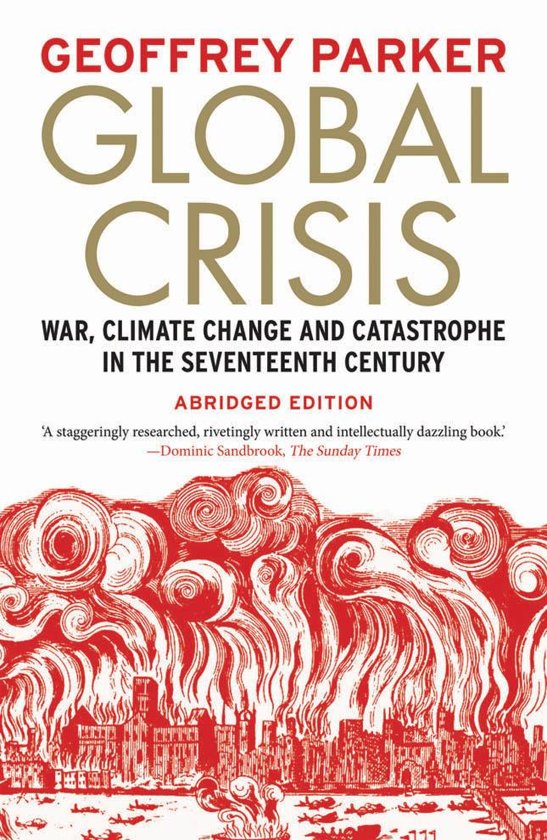 Climate change would have done a great deal of damage on its own, but without the fiscal extortion, military destruction, political ineptitude and uncertainty that accompanied almost universal conflict, the crisis would have had considerably less impact. The central section of the book is made up of a series of extended narratives set across and beyond Eurasia.